Showing posts from February, 2010
Show all

February 24, 2010
After getting beat down on at the Eastern Cup on Saturday I headed north, back to the safe confines of citizen's racing for the Flying Moose up in Bethel. With an Eastern Cup being run at Holderness that day, it was a good chance to try to reassemble some ski-esteem with the Birkie looming.

Due to low snow (although a lot more snow than Holderness, I heard) the race was run exclusively on the Gould Academy trail system. Usually the race loops through there before ultimately continuing to the Bethel Inn for the latter half. Every time I've done this in the past, I've lost places after leaving the Gould trails, so I wasn't gonna complain about the change.

The feel-good-about-yourself plan was in full effect so I took it out s-l-o-w. With only about 60 people in the mass start it wasn't like I needed to throw elbows, and I certainly didn't need to stake out a spot at the front just to blow up after 5k. So everyone who wanted to race immediately went up the trai…
3 comments
Read more

February 22, 2010
It's been 3 years since I last did an Eastern Cup. There's a reason for this. Eastern Cups are basically the UCI race of nordic skiing, minus the B field that might allow one to salvage their self-esteem or even have a little fun. Nope, an Eastern Cup is basically an experts-only race, made even more aggravating by the fact that most of the "experts" are high school boys.

So that's why I'd been avoiding them for the last 3 years, but hey, as part of the "Birkie Build" training program (patent definitely not pending... ask me next Monday) I needed a big weekend, and I train most effectively with a number on. Thus I registered for the Eastern Cup under the guise of "training," as if that would make me feel any better when the results went up.

The weather was beautiful for riding, and gross for classic skiing. 40+ degrees with slush in the sun and glazed tracks in the shade? LOVELY.

This week's Tuesday night race at Weston was especially exciting because it's the "vacation week race," where everyone with kids doesn't show up, because they're stuck at the police station after chaining their kids to a stake in the yard, because they were bouncing off the walls for the last four days.

Also adding some excitement to the mix was the "Whistler Olympic Park" conditions -- 32 and snowing. Warming up, I thought I had atrocious skis, but it turns out that no one's skis were actually gliding. As soon as the race got going, I was like, "oh, we're all going slow tonight. Phew." And sure enough, race time was about 3 minutes slower for a 20 minute race.

So despite the standard prerace whining, I made it into the front group pretty easily. Cool. It was weird because mentally, I felt like we were going really slow, but I was still poling and skating pretty hard, so it wasn'…
1 comment
Read more

Close to the Coast Race Report 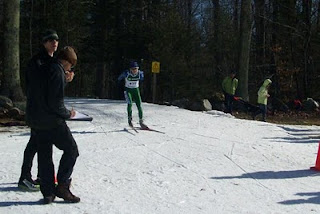 It's been 13 months since my last interval start ski race, so I was inexplicably pumped for a 10k skate race up at Pineland. "Man, I can't wait to ski alone for half an hour! Just me and my pain, out in the woods for a ski, interrupted only by the occasional terrified glance backward to see if anyone is catching us." It's gonna be great!

With the Birkie looming in 14 days there was no way that Cary could afford to let me get in any extra training in, so he joined me on the drive up through the snowless coast of Maine.

Of course the race was close to said coast, and as a result there was virtually no snow to be found at the race site, either. We parked in a field that had been plowed, but if you climbed over the plow banks -- grass. The only snow in the whole field was at the edge against the trees, where it was slightly shaded from the afternoon sun.

Oh, this is going to be great. Glad I brought my rock skis.

Once in the woods, though, everything changed. The …
4 comments
Read more

February 10, 2010
I think the best thing about the winter season is that even when I get sick and take a weekend off, I can always hit up the ol' Tuesday Night smackdown at Weston and get in something blogworthy.

Before we get to the "action" (spoiler alert: there was drafting), I want to call your attention to a new race on the New England calendar.

Last year my dad and I were kicking around the idea of trying to make a single-loop 50k "Dixville Loppet" up at the Balsams, you know, that place with the giant trail system and amazing snow that never has races, and thus is unknown to the nordic racer dork crowd?

I don't want to give my INTERNET PRESENCE too much credit or anything, but they are finally hosting a race at the Balsams this year, and it's a single lap 30k classic race, aka a moderately more sane version of exactly what we proposed. The great irony it's the same weekend as the damn Birkie, which I signed up for and bought airfare for back in November. So…
7 comments
Read more

I realized the other day that I had virtually the exact same January 2010 as January 2009. Same races, same training, same results. I think I'm turning into solobreak. And now it's February 2010, and I have the same head cold that I had for the first week of February 2009. Creepy.

Of course, I did do one thing differently in January, I finally hardened up and did a 50k before March.

Sentences like that one prove that I'm not a real skier, because it's past mid-season for most people at this point, and they've been on snow for 2+ months, rollerskis since September, and are trying to "hang onto their form" as the season drags on. Meanwhile, I'm congratulating myself on the fact that I skied for a whopping 3 hours without breaking down completely.

Craftsbury is the "big" New England marathon, which isn't saying much compared to actual big marathons like the Birkie. But since I'm registered for the Birkie (wooooooooo) I figured it wa…
6 comments
Read more
More posts