Showing posts from August, 2010
Show all

I did not race my bike this weekend.  It was a combination of post-24HOGGum depression and lack of appealing options.  This lead to some incredibly productive downtime, some of which even happened without the aid of caffeine.  Check it out.

I made the crossresults.com team site.  Did I mention that I started a team?  I think so.  So far they are a beautiful army of misfit cyclist who heed my beck and call.  This past weekend they kicked off the season and did hilariously poorly.  I already love them.  Except for Kevin.

The crossresults.com kits came in this week and they look fabulous.  One thing I forgot to mention last time I was gushing about them, these aren't the team kits so much as the website kits.  The team will be racing in skinsuits with a different but equally sexy color scheme.  If you were avoiding purchase of one of these because you didn't want to own the kit of team you don't race for... fear not.  This will just let people know that you like THE INTERNET,…
20 comments
Read more 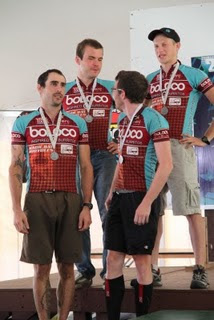 The 24 hours of Great Glen is pretty much the highlight of my summer mountain bike season. It's not so much a race as an experience... as most normal races don't involve days off work, night rides, light warrantees, loss of sleep before the race, loss of sleep during the race, loss of wakefulness after the race, and a total inability to get of your own way for the next 3 days.

Yeah, it's Thursday and I'm just getting around to the blog. Hey. At least I'm doing it at all.

So this year I finally got on a proper bikin' team, and lo and behold I have 3 teammates who ride mountain bikes fast, sometimes faster than me. A 24 hour pro team was a given, the only question was how much ass we were going to kick. Right?

Well, I like uncontested victories as much as the next guy, but Adam St G must not, since he had the audacity to register a 2nd pro team. Didn't he get the memo, only one pro team allowed?

I think I decided to do this one last year, when they ran the first edition and everyone said "wow, that was like a cross race!" You can compare pretty much anything to 'cross and get me excited. If someone ever says "jury duty is like a cross race" I'm gonna be so disappointed.

We had a healthy 5-man team from Back Bay in attendance, myself, Kevin, Mike, Harrison and Avi. We were the 3rd largest team behind ECV and Minuteman, so we concluded prerace that "we better do some shit."

The only part of the plan that actually got enacted was the string it out early. We were those guys who get to the start line ten minutes early and staked out the front row, but with 3 turns of 90 degrees or more in the first quarter mile, I think this is a rare case in which it's a good idea.

We rolled out and I got the holeshot thanks to my mountain pedals. Wow, this IS like a cross race! I hit the first three turns, swung off, ECV guy comes through going H…
10 comments
Read more

August 02, 2010
Last year, I did the Darkhorse 40. It was 90 degrees and humid. I flatted out like a chump after 15 miles, sparing myself a good 2 hours of suffering in the heat, and also allowing me to be back home in Boston by 4pm. This might be why I was convinced that the event was SO AWESOME that I HAD to come back this year, even though I could've just driven to the local Root 66 race just an hour away.

This probably sounds like a segue into "so it turns out the Darkhorse isn't awesome at all" but guess what, it's not! The Darkhorse rules, which is why it registration filled up three weeks ago.

My hotel companion was the lovely MegA, because Linnea has started transforming into a cyclocross killing machine and no longer has interest in 4 hour mountain bike races. It is August, after all.

It was Meg's first mountain bike race of the year and first-ever 40 mile mountain bike race, so I spread as much lies and false information about what was up as possible. Despi…
8 comments
Read more
More posts