Showing posts from April, 2012
Show all

April 16, 2012
I never even meant to do this race.  After Hopbrook, I was all like "alrighty, let's get down to business and train well for 3 weeks in the hope of being less embarrassing at the Fat Tire Classic."  And I did!  You could tentatively call what I started doing a "block," if you were one of those people.

Obviously that lasted until I realized that there was a bike race I could fit into my schedule, because playing bikes is way awesomer than training bikes.

Especially when it's a mere 25 mile road race with 20 cat 3s in it.  None of this riding-in-the-pack for hours BS, this was going to be an hour of action!  Or something.  Anyway, it seemed fun.  So off I went, with Steve, RMM and geewhits as gas money.  On the way down, RMM regaled us with tales of getting Curley'ed in a past edition of this race, and filling our heads with lies like "the break will go on the first lap, so you have to cover everything."  As you might imagine, #iwasexcite. 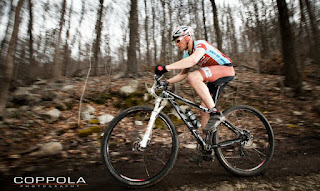 It used to be that I did better at Hopbrook every year, but now that I'm in the twilight of my career (was that a joke?  I'm not sure either) I seem to always find myself behind the fitness curve come April.  This year's mild winter was especially bad for that, as I spent most of March trying to get healthy and patch my ego back together after the Birkie.  Meanwhile, everyone else was out DRILLING IT.  So I figured I would just go ahead and avoid Hopbrook, and buy 3 more weeks of secret training before I had to face the Pro/1 music.

BUT THEN I REMEMBERED BIKES ARE TOTALLY SWEET!  Hmm.

Christin was planning on skipping Hopbrook so I was like, yo, that's cool, I don't want to go either.  But then she was like, "wanna go race Hopbrook?" and my heart did a little flip and I was like YESYESYESYESYESBIKES, so I guess I really did want to go.

No amount of wanting to ride fast will make you ride fast (well, ride fast for 2 hours...), so I knew it would be bad, bu…
1 comment
Read more
More posts